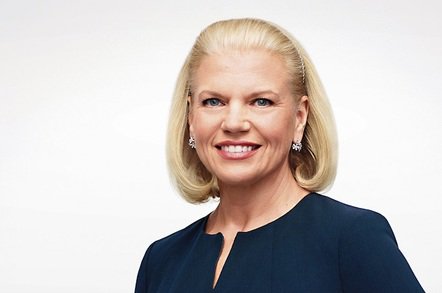 3 years ago admin Comments Off on Bigger Blue: Tonic for Ginni as IBM actually does OK in storage

Four quarters of growth in a row ain’t too shabby

In the systems business, up 32 per cent year-on-year at $3.3bn, the three brands – mainframes, Power and Storage – were all up. IBM doesn’t release sector revenue information these days, but did give out percentage annual growth numbers;

The storage growth rate of 8 per cent was the weakest of the three by far, with no boost from a hardware advance.

But as the fourth straight storage growth quarter following years of decline, the result gave IBMers something to cheer about, and storage CMO Eric Herzog did:

In the earnings call Martin Schroeter, ex-CFO and now SVP for Global Markets, said: “Looking at some of the revenue dynamics of the fourth quarter, our Systems results were terrific across IBM Z, Power and storage.

“Storage hardware was up 8 per cent. This is the fourth consecutive quarter of growth, so obviously we’ve got some momentum here. We gained share in a very competitive market, while holding margins stable.

“We had double-digit growth in our high-end hardware products for the quarter, which reflects the demand for flash, as well as the capacity increase linked to mainframe demand. Our all-flash array offerings once again grew at a strong double-digit rate, and faster than the high-growth all-flash market.

“And our storage software, which is reported in Cognitive Solutions and a major contributor to our storage business, had strong revenue from our Cloud Object Storage offerings.”

CFO James Kavanaugh attributed the growth to the storage team “repositioning their portfolio, leveraging and growing share in flash, but it’s also about software-defined and also, more importantly, as we move forward, object storage that will continue to look for growth”.

Schroeter backed up the last point: “Storage, as it moves to the cloud, needs object store. And our object store offerings in storage are doing terrifically well.”

We did some rough storage desk math on IBM numbers, calculating the growth percentage quarter by quarter based on real IBM numbers a few quarters ago, and came up with fourth quarter Systems Business storage revenues of $775.1m, and full 2017 revenues of $2.3bn. We charted them to get a sense of the trends: 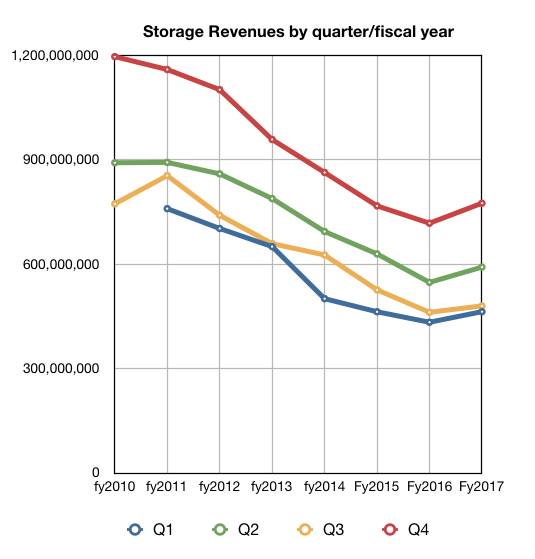 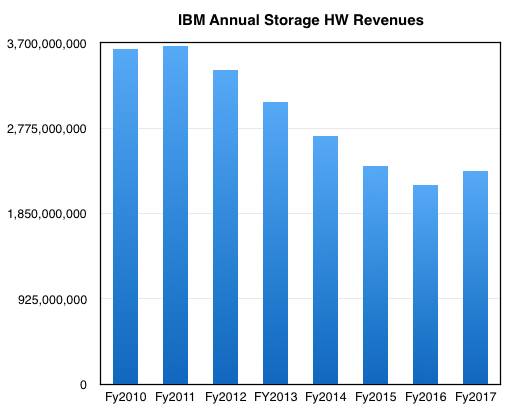 Given that these are rough and ready numbers, we see trends agreeing with Herzog’s view above. There has been a sustained turnaround in IBM’s Systems Business storage fortunes this year.

But will it last?

OK, that’s good. Will it continue? There has been weaker competition from Dell EMC due to integration issues, but it is fighting back with “Refuse to Lose” channel promotion.

The mainframe and Power refresh cycles should continue for two or three quarters more, and the Cloud Object Storage (COS) growth should continue as well, although there might be cannibalisation here, with on-premises IBM unstructured data storage moving to COS.

If growth continues, IBM storage revenues might reach $850m for the full 2018 year. That’s assuming a revitalised Dell EMC storage product and channel offering doesn’t eat into its growth rate so much as to stop it in its tracks.

We don’t see IBM having a strong scale-out filer offering, nor a modern data management offering similar to those being delivered by Cohesity, Rubrik and many others, and would not be surprised if there were acquisition activity by IBM this year to strengthen its storage portfolio and keep the growth momentum. ® 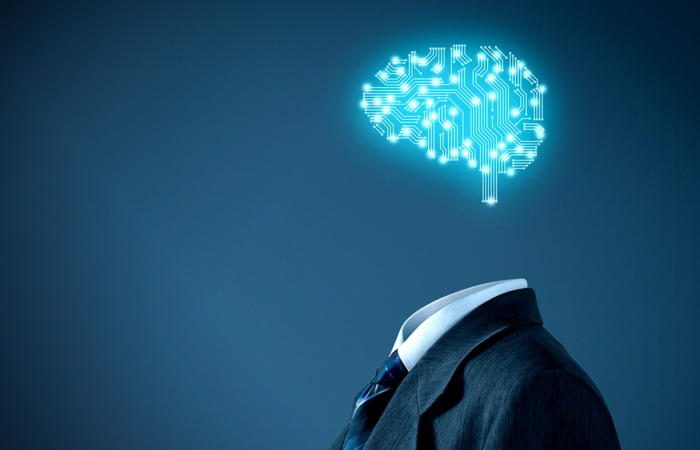 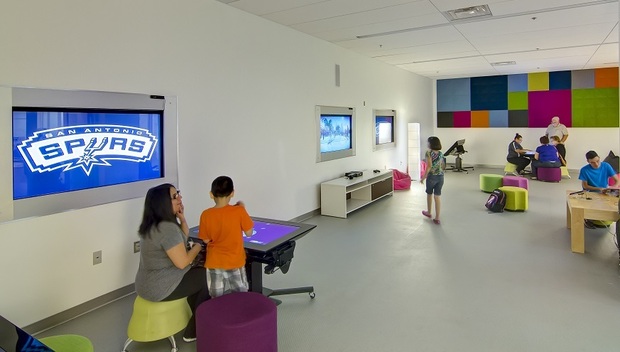 Every day should be Bring Your Child to Work day

My 6-year-old was sick a few weeks ago. It started with the normal whine I’m sure most parents are used to hearing on a school day: “I don’t feeeeel... Read More 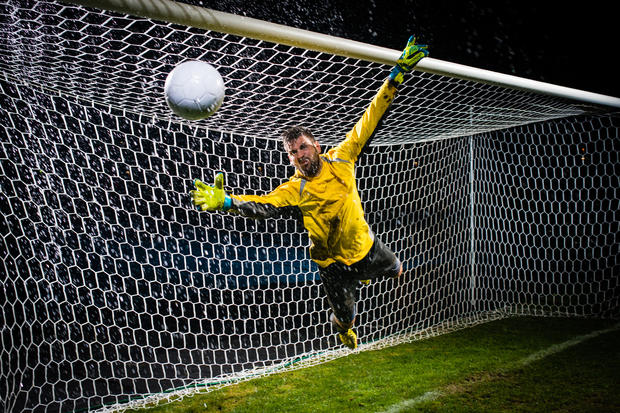