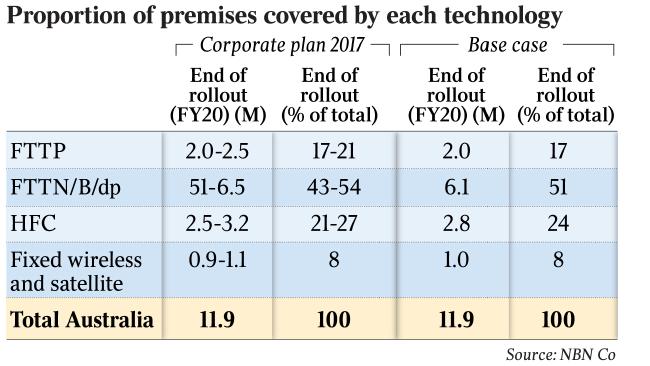 The technology could help NBN Co deliver symmetrical speeds of 10 gigabits per second to premises on the full fibre footprint and also benefit end users connected to retail services over the fibre-to-the-basement (FTTB) and fibre-to-the-curb (FTTC) components of the NBN, through the application of G. Fast and XG. FAST technology.

As for users on the pay-TV cable and fixed-wireless footprints, the NG-PON2 technology could also potentially add extra capacity in the fibre that supports them.

However, for premises on the fibre to the node (FTTN) network, which relies on copper, the latest technology trial holds no immediate promise. For NG-PON2 to be effective for the FTTN footprint the fibre would need to be rolled out closer to the premise and, for the time being, there is little prospect of that happening.

NBN Co’s reliance on FTTN as an effective pathway to ramp up the rollout means that the numbers don’t add up for any shift in access technology.

According to NBN Co, NG-PON2 tests in Melbourne have delivered peak trial lab speeds of 102 Gbps, with the technology ­allowing much higher total network throughput of up to 40 Gbps downstream and 10 Gbps upstream over a maximum of 40km of fibre.

“We are assessing every technology to see what is the best fit for us and our long-term technology road map,” he said.

“This allows us to maximise the value on the investment we have so far made in fibre.”

The trials open up the path for NBN Co to offer more robust business-grade services at a time when the demand for NBN is starting to increase.

According to Stephen Rose, industry marketing manager at Commercial Property Guide, NBN is a hot-button issue for many small to medium businesses but many businesses in the cities are facing a long wait.

“SMBs keep saying to us how important the NBN is to their business but when it comes to delivery the network just isn’t there for them,” Mr Rose told The Australian.

“Very few inner suburbs are in the top 100 suburbs with a high percentage of NBN coverage and availability gets worse closer to the centre of the city.

“The CBDs are largely NBN-free zones.”

The different access technologies also pose a headache for small to medium businesses, with those on the network left unimpressed by quality of the service.

“Uploads really matter to SMBs and often that’s missing for many of them,” Mr Rose said.

The expectations and knowledge gap for small to medium businesses is a byproduct of the way the NBN has been mandated to roll out.

With inner-city areas and the CBDs deemed to have effective existing fixed and mobile services, the NBN rollout was designed to get access to those areas that were most underserved.

Unfortunately while bigger companies have the bank balance to access enterprise-grade fibre services, Mr Rose said small to medium business owners had to rethink their options and just how long they could afford to wait until the NBN became available.

It was the grand home on a perfect riverfront setting that swim star Susie O’Neill, aka Madame Butterfly, and her family had planned to build until busy family life... Read More