3 years ago admin Comments Off on Samsung Galaxy S8+: Seriously. What were they thinking?

As you should expect from a phone that’s almost £800, much of the technology is sensational. The edge-to-edge display is not just pretty, it’s practical too, and the phone feels great to hold. But Samsung puts two serious hindrances in the way of the owner.

One is a finger print sensor that is hard to reach and whose profile and positioning will seriously muck up your photos. The other is Bixby – purportedly an “artificial intelligence assistant” but which turns out to be the maddest example of buzzword-induced corporate self-delusion since Tronc.*

Last year’s Galaxy S7 was so far ahead of the pack it seemed pointless to recommend another Android in the same premium price category. The Galaxy S8+ should be even better, an exemplar of good design and well implemented new technology. The Note 7 left a vacuum for the shopper who wants a premium phone and knows and trusts Samsung from past experience.

But, but… Bixby! And that flaming sensor placement. It really defies belief.

Samsung admits that with Bixby, which isn’t even half finished, you have to change. Have a look:

Taking it for a spin…

Here I’ll provide some subjective impressions; the phone has been used as a daily driver for over a week.

Samsung’s curved edge glass was introduced a couple of years ago, in the Galaxy S6 Edge. Nice to look at, nice to fondle, but of any practical use? Well the S8 answers that question definitively. The curved glass is used to pack a lot more pixels into your hand. The picture, rather than frame, comes to the fore.

This results in a much slimmer design. As one reviewer noted, the S8+ is just 3mm wider than the Sony Xperia Z5 Compact, a phone sold (as the name implies) on it being er, compact. Yet almost all that surface is being used for pixels, and the side bezel has entirely disappeared.

For the past few years we’ve used the length of the diagonal across the display as a proxy for the size of the phone, but the disappearance of capacitive buttons, and ever-shrinking side bezels made this much less meaningful. Edge-to-edge displays mean we can probably dispense with this rule-of-thumb entirely.

The S8+’s curves make it immediately comfortable to hold, but after a few days, you appreciate the curved glass at the back more and more, it’s like a glass pebble. And almost as slippy. Unsurprisingly it is one of the most fragile designs drop-testers have encountered, and sadly, really should be cased ASAP after purchase.

Now to the major design flaw. Have a look at the picture below. 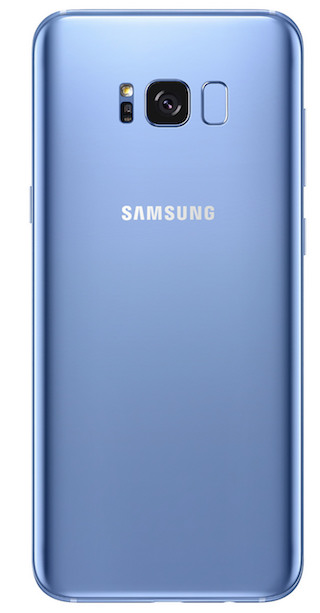 Look at that vast empty blue silvery expanse, as big as the Pacific Ocean.

Imagine where your fingers fall when holding the phone safely and comfortably with one hand.

And now look where Samsung placed the fingerprint sensor. Up high on the back, next to the camera…

Apparently, Samsung intended the fingerprint sensor to be concealed under the main display, but the technology wasn’t ready for market in time. So late in the day, it had to scramble for a place to stick a conventional fingerprint sensor. And it chose about just about the worst place it could.

The fingerprint sensor is right next to the main camera on the back, but is poorly defined. This means that your finger typically finds the lens when unlocking the phone. Samsung knows this is a problem, occasionally warning you that the camera glass is dirty or smudgy. Worse, on the Galaxy S8+, the sensor is simply too far high up the back to be comfortable, and you need to unlock the device then reposition it in your hand – or use two hands. On the S8 it’s less of a stretch.

If the sensor was positioned an inch lower, and centrally, everything would be fine. I found that after a week I picked the phone up by the middle to unlock it, it was still an inconvenience, and the photography was constantly impaired.

There are other ways of unlocking the phone: using facial recognition or iris recognition, but these aren’t terribly reliable and secure, as Samsung warns you in the respective enrolment processes for each method. I could unlock the phone with a photo, and the Iris scanner really doesn’t work outdoors or with spectacles – a known issue. What a shame, for the rest of the phone deserves good marks. The OLED display is terrific, and so detailed Samsung doesn’t set it to its highest resolution as default. Calls and ringtones are nice and clear, although for almost £800, it was a bit cheap of Samsung not to built in stereo speakers.

Battery life from the 3,500mAh pack held up surprisingly well, but then Samsung nags you almost as much as Huawei these days about power consumption.

Voice calls and signal reception were also up to par, and VoLTE on my EE-supplied unit was particularly welcome. VoLTE allows you to wander away from your Wi-Fi calling location, and it won’t drop the call.

Samsung also skimps a bit on memory and storage compared to its aggressive rivals, particularly Huawei. For under £500 you can pick up a dual lens Huawei phone with 6GB RAM and 64GB storage, and a 4,000mAh battery: it’s very good. And on doesn’t have the sensor flaw. The S8+ is £300 more expensive, the difference being enough to buy a decent TV, but the Samsung only comes with 4GB. Amazon on Wednesday unveiled its new product the Echo Look, which a voice-controlled camera connected with a mobile application that helps the user to choose the best outfit. Priced... Read More